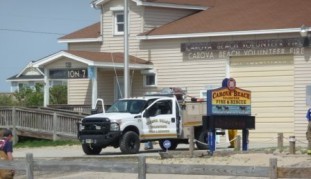 Construction on the station building and facilities progressed in stages. The station has been constructed on two 50/100 ft. parcels of land, one donated and one purchased from the developer.

The first building, which included the present office, meeting room, restrooms and kitchen along with a two-vehicle bay with gravel floors, was built in the early- to mid-1980s.

Over the next few years, the second floor of the office section was finished. A concrete floor was installed in the two-vehicle bay, and a concrete apron was added in front of the station.

In 1990, plans were made to add an additional three-vehicle bay and a carport to the existing facility.  An additional 100 x 150 foot property was purchased in 1990 to provide the space for expansion.  The building additions were completed in 1992.

The next major necessity was a place to land a helicopter. The station worked with the owner of parcel of land across the street from the station, to use as a helicopter landing site. The owner agreed to its use as long as it was included in the department's insurance. This two plus acre tract, which was also adjacent to one of the area canals, was cleared in May of 1990. It provided the needed space for an unimproved landing zone (LZ) until 2000.

In 1999, two additional lots, each 150 x 100 feet, located south of the station, were purchased and in 2002, a 100-ft2 lighted helicopter pad was completed on this new property.  The former unimproved LZ became a training field for the department.

In 2007, the need for additional vehicle space, a secure location for the ambulance, and an improved security system for the station was resolved by two projects.  The carport was enclosed  and a security door was installed between it and the apparatus bays.  A second project provided access control for both the main building and separately the security needed for the ambulance bay. This system also provides heat, smoke and CO monitoring and is attached to a national service.

Interested in joining?  General membership meetings are held the second Saturday of each month at Station 7.